Priority on Simplicity and Compatibility

Here is quick overview that you can complete in 20 minutes covering the most basic, compatible Markdown everyone should learn. The priority is on simplicity and maximum compatibility. It allows your content to be used everywhere. There is no more ubiquitous form of knowledge storage.

Before getting into the details of the syntax it is important to mention that everything that can be grouped together (which Markdown engines call blocks) should have a blank line before and after it. Not all Markdown engines require this but enough do to make it a habit.

Plus this practice makes reading the source much easier and renders more consistently. For example, FireFox will display the following Markdown differently when rendered as HTML:

This will become the following HTML:

Notice that the second has a whitespace line return after the </span> while the first does not. This matters to FireFox (and presumably other browsers) differently than others and will break the styling of the first line inconsistently.

This is the kind of subtle difference you want to avoid — especially when eventually creating hundreds of pages of Markdown knowledge source.

Separation also makes is very easy to find the Markdown tokens in your source using simple tools and your editors search functionality.

A paragraph is either a long single line of text followed by a blank line or multiple lines one after another. There are solid arguments to use one or the other depending on your needs. You pick but it’s a good idea to use one consistently throughout the same document or knowledge base.

One star for italics:

Any time you don’t want, say, a star (*) to be recognized by the Markdown parser just put a backslash in front of it. This goes for all the other special symbols used in Markdown. In fact, you can put a backslash (\) in front of any character whatsoever in Pandoc Markdown to cause it to be used as is.

One particularly common character to need escaping is the dollar sign ($). This is because Pandoc supports the inclusion of LaTeX for math notation and uses the dollar sign to mark it. Just remember to always put a backslash in front of it and you are fine.

Formatting is allowed in headings but can be problematic with some renderers. Avoid if you can.

Generally you should never have more than one first level heading (# Heading One) because search engines prioritize it. When using Pandoc you will not even need a level one heading because the Title is better placed in the YAML meta-data property instead and rendered with the Pandoc Template.

Hyperlinks (stuff you click on) come in three basic forms:

The most common link in Markdown is just words you can click on that take you to local places or external sites. The web address must be either pointing to a remote site or so something on the same site that document is on.

Sometimes you want to show the full web address.

[Can’t I just use http for links?]

This also works with other link types besides http. (Yes, there are several other URL schemas.)

Images are just links with an exclamation point in front. Make sure to put a blank line before and after any image for maximum compatibility. Inline images are not widely supported and mess up other formatting in almost all cases. 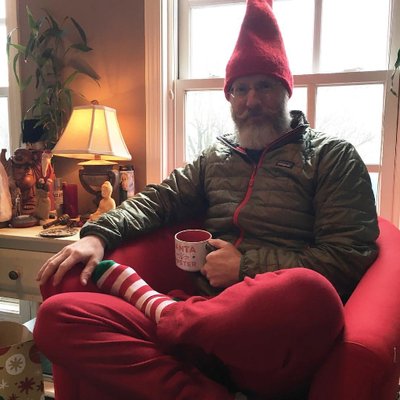 Images can also be used as links.

Since storing video files with your site is usually rather prohibitive due to their size, consider taking a screenshot of the first frame of the video hosted on a video hosting site and using that to link to the external video on that site. That way the page will still load properly even if you do not have Internet access which would otherwise block embedding the video in the page instead. Besides, embedding videos is generally a really bad idea because it adds HTML to your Markdown unnecessarily causing it to be incompatible with other potential rendering formats.

Simple lists are supported by pretty much everything. Put the list items one to a line. Make sure to put a blank line after the list.

Use stars followed by spaces (*) for bulleted (unordered) lists:

Use the number one followed by a period and a space (1.) for numbered (ordered) lists:

Always use 1. so that if you change the order you do not have to renumber the source itself. It will automatically change the number order when rendered.

Also called “horizontal rule.” These just break up the page usually with a horizontal line.

Here comes an example of a separator.

Use four dashes for consistency even though there are dozens of ways to indicate separation (some of which allow stars to be used as well). This consistency allows you to easily find your separators and keeps them from being confused with YAML markers (which use three dashes) and inline formatting (which uses stars *).

Hard returns are a way of starting a new line within a given paragraph. Type two spaces (␣␣) followed by the line return.

Rose are red
Violets are blue

The Pandoc VIM plugin is particular useful at showing these with ligatures.

Blocks separate text or code from the document usually as a box. There are two main block types to remember: plain (preformatted, as-is) blocks and code fences. Both use three backticks to “fence off” the text or code.

When you just want the text to appear exactly as it is just use the triple-backtick fence posts.

Code blocks are perhaps the single biggest reason to use markdown for all your tech writing and note taking. If you want syntax highlighting in your notes you get it for free. This provides very high-quality publications very easily

Please be considerate of those who have trouble distinguishing between colors when making a syntax highlighting style selection. Many cannot see many of the colors making the text in those colors virtually invisible.

When you want to add syntax highlighting or otherwise indicate how the text should be handle provide an information tag immediately following the first triple-backtick fence, so for JavaScript it would be:

Note that color syntax highlighting here has disabled because it can distract from equal focus on everything being displayed and creates unreadable text for those challenged with distinguishing different colors — especially in educational settings.

Although there are other ways to write blocks, using triple-backtick fences is the most consistent way to do them all. This allows quickly finding your blocks when editing as well as filtering them out easily with scripting or simple parsing. It is also the most widely supported. Discord, for example, only supports this format of code fence.

Here is a short list of supported language tags:

Even though all forms of Markdown support code fences that immediately contain content without a blank line after the opening fence post or before the final fence post you really should always add one and adjust your rendering styles appropriately. This is because without that initial blank browsers like FireFox that correctly respect whitespace as a DOM node will show your code incorrectly in a pre-formatted style. Plus the separation makes your knowledge source much easier to read and search.

In the single exceptional case where you need your block to contain markdown code you should use three or four tildes (~~~markdown or ~~~~markdown). Again, this consistency allows you to filter out blocks from simple scripts that examine each line which can be useful for coding keyword searches and such.

There are literally an infinite number of possible ways to indicate a block supported by the original and most derived Markdown parsers. Just stick with these two options. Consistency is far more important than artistic expression. Blocks are particularly important to keep consistent because you will frequently want to simply strip them out for keyword searches and such. Following these suggestions makes this trivial even from simple shell scripts.

Make sure there is no space after the backticks and before the block identifier (js in the example).

Technically paragraphs, lists, and even separators are also considered blocks when parsed.

Blockquotes are for quotations and only quotations. Avoid the temptation to use them for anything else because if you do you can semantically identify all the actual quotes in your content.

Begin each line of the block with a greater-than sign (right angle-bracket).

Usually you will just have a single paragraph:

“One of the painful things about our time is that those who feel certainty are stupid, and those with any imagination and understanding are filled with doubt and indecision.” (Bertrand Russell)

Use of quotation marks surrounding the text of the quote itself is completely up to you but is recommended so that multiple quotes can be combined next to one another without reader confusion.

In the rare case that your quotation expands beyond a single line make sure to join separate paragraphs with a blank line that is also included:

This is the first part of the quote.

Here is the second part.

Comments are just simple HTML comments, which were inherited from SGML dating back decades.

This is a Markdown paragraph with another comment in it.

Even though you should seriously avoid making your Markdown HTML dependent by including HTML as the original Markdown allowed, comments are a fair exception to this because no Markdown has any other syntax for indicating comments and every Markdown parser engines supports them.